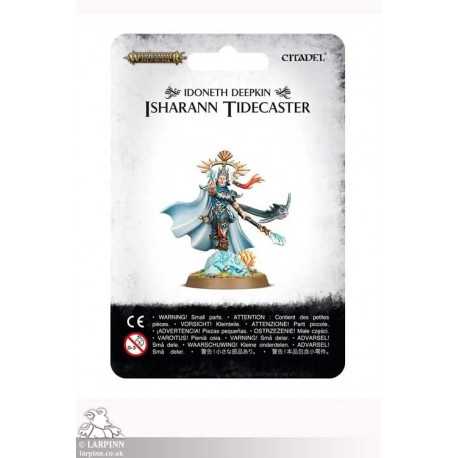 It is the Tidecasters who conjure the phantasmal sea that allows aelf and aquatic beast to move and breathe as if they were in their own natural environment. They are able to conjure spells from the repressed anguish of the Idoneth, the curse that echoes still from their ancestors’ torture within Slaanesh. Such magics take the form of crushing waves of despair, black pits of hopelessness or raging maelstroms of horror that shatter the minds of the foe, leaving them open to attacks from the Namarti and Akhelians. So potent are these enchantments that some victims believe themselves to be trapped underwater, causing them to drown in their own fear and sorrow.  This multi-part plastic kit contains the components necessary to assemble an Isharann Tidecaster. Standing atop a large, fallen aelven ruin (the head of a statue, featuring a carved ruin on the forehead), she is posed very much in the manner of a wizard summoning something dark – her eyes are closed, and she clutches a rune in her right hand (the aelven rune for water in fact, an indication of the phantasmal seas she controls). She is clad in metal plate armour, with spiked shoulder pads holding the large cloak that billows behind her. Above her head is a finned crest attached to her helmet, with a shell at the centre. Denoting her wizardly status further is a scroll case and a set of potion bottles that hang from her hip. She is armed with a pelagic staff, and is accompanied a spirit guardian which swims around her, keeping her from harm.  This kit comes as 12 components, and is supplied with a Citadel 32mm Round base.