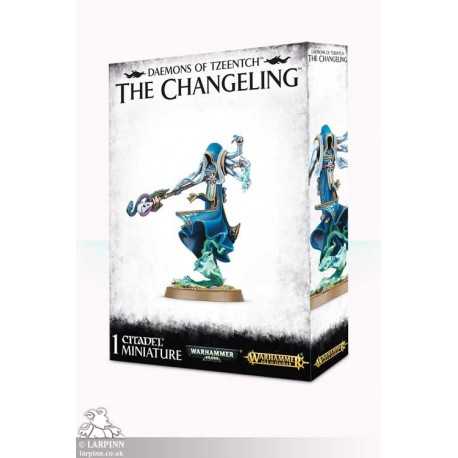 None recognise the presence of the Daemon known as the Changeling before it is too late. A master of illusory disguise, the Changeling secretes itself amongst its quarry, sowing confusion and misdirection. Upon throwing aside its fleshly masquerade, the Changeling uses trickery and its trickster’s staff to openly blast its foes. This multi-part plastic kit contains the parts necessary to assemble a Changeling. Armed with the Trickster’s staff in one arm, with its sinister snake on the end, his other 3 (yes, 3) arms are all concentrated on his left side, and are preparing to blast warpfire at an unfortunate foe. Clad in a cloak carrying 3 mysterious scrolls, with a huge hood obscuring his face and hiding his identity, he stands aloft magical flames which elevate him from his base.  He comes in 15 parts, and is supplied with a Citadel 40mm Round base.