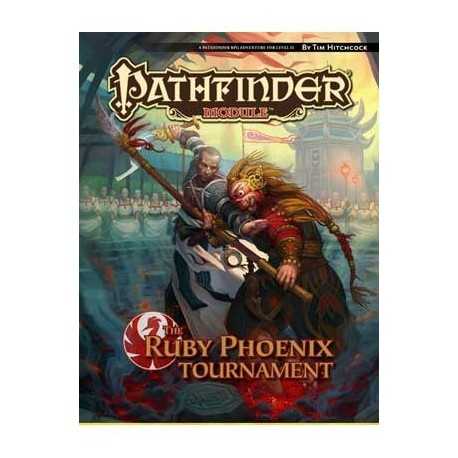 A tournament-style adventure for 11th-level characters

Once every 10 years, the cosmopolitan city of Goka on the western coastline of Tian Xia hosts the Ruby Phoenix Tournament on an island off the coast. Infamous for its strange spectacles and exciting mix of fighting styles, the contest draws combatants and spectators from all over the world. The tournament’s winner gets his choice of a single item from the legendary treasury of an ancient spellcaster and earns a reputation beyond imagining. But this year, not all who have come to compete do so out of respect for the traditions of battle or even out of greed for the reward. They seek instead nothing so much as red revenge and political domination!

Can the PCs’ team of contestants survive six bouts in the Grand Pavilion arena against the mightiest combatants and cleverest battle mages on Golarion? Can they prove their mettle in tests of mind and body? Can they foil the plans of an evil organization and its powerful allies who hope to destroy the Ruby Phoenix Tournament and see its champions dead? Step into the arena to find out!

The Ruby Phoenix Tournament is an event-based adventure for 11th-level characters, written for the Pathfinder Roleplaying Game and compatible with the 3.5 edition of the world’s oldest RPG. Set in the Dragon Empires of the Pathfinder campaign setting, the adventure serves as an ideal introduction to the folk and fighting styles of the lands encompassing the Eastern-inspired continent of Tian Xia, and contains a fully detailed island location and a brand-new monster sure to challenge players in any campaign setting.