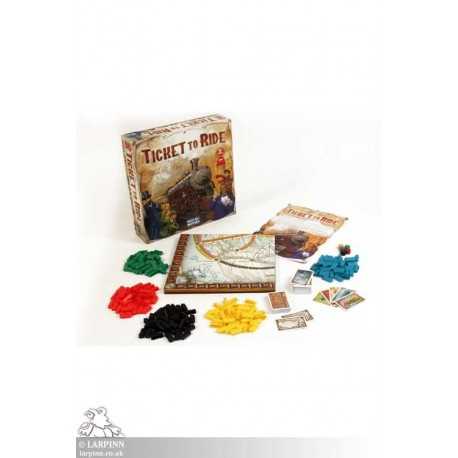 Ticket to Ride - The Board Game

Ticket to Ride is a cross-country train adventure in which players collect and play matching train cards to claim railway routes connecting cities throughout North America. The longer the routes, the more points they earn. Additional points come to those who can fulfill their Destination Tickets by connecting two distant cities, and to the player who builds the longest continuous railway.

The object of the game is to score the highest number of total points. Points can be scored by:

A fantastic medium-weight game - one that plays equally well with two to five players. The components are superb, the artwork is great, the game is downright fun (and nasty sometimes), and the total package is a very strong contender for the Spiel des Jahres 2004
Game play is very tight, and I found that game scores can run very close - making for an exciting game, all the way down to the finish."
Tom Vasel - boardgamegeek.com 9.5 out of 10 rating

"I feel safe in saying that Ticket to Ride is an absolutely superb game and is highly recommended."
Greg Aleknevicus - The Games Journal

"Ticket to Ride is a fantastic family game because it is easy to learn, plays fairly quickly, and appeals to players of all ages - both kids and adults will have fun trying to become the next railroad baron... All things considered, Ticket to Ride is definitely the top game of 2004 for families and casual gamers alike."
BoardGameRatings.com - 5 Stars