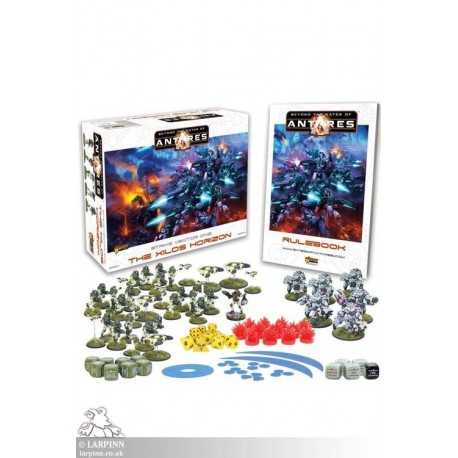 Beyond the Gates of Antares - Starter Set

Beyond the Gates of Antares is the new science-fiction skirmish wargame written by Rick Priestley (the creator of Warhammer 40,000) that pitches technologically advanced human civilizations into a conflict that no one can afford to lose.

The game is rich in detail and extremely ambitious in scope with initial rules and army lists that describe six different Antarean factions: the PanHuman Concord, the Ghar Empire, the Isorian Senatex, the Algoryn Prosperate, the Freeborn Vardos, and the Boromite Guilds. Beyond the Gates of Antares game play makes use of the successful and exciting dice activation system first pioneered in Warlord’s popular Bolt Action WW2 wargame – ensuring that both sides remain active and engaged throughout every game. Resolution is by ten-sided dice offering considerable expansion and great range of detail compared to traditional six-sided dice.

Strike Vector One: The Xilos Horizon is the battle starter set for Beyond the Gates of Antares.